Last weekend, I got to attend a brilliant seminar with Susan Friedman, Ken Ramirez, and Helen Philipps. Phoebe and Fanta got to join me for a four-day training vacation in Puchberg am Schneeberg.

I’m very proud of my puppies: they’ve come a long way since the last time we went on a seminar together.

When I adopted Fanta with about 2.5 years; he obviously had never lived in a house or attended seminar-like events before. After building a foundation of trust, we practiced: when I attended an event that allowed dogs, I’d bring him to my seat in the seminar room for a few minutes; he’d get a tasty snack inside; I’d protect him from people wanting to pet him or stare at him, and a few minutes later, we’d leave again and he’d get to go back and relax in his car crate. Just a small amount of exposure paired with high-value reinforcers, and then back to his safe space. I didn’t expect him to lie down back then; he wasn’t ready for that step yet.

This time, after thinking a lot about acclimation (thank you, Denise Fenzi!), I made a point of bringing Fanta in about five minutes before the lectures started. We’d walk through the room, he got to sniff the floor, investigate people’s bags, say hi to a dog or two. I had not done this much acclimation in this context before, and I think this was part of what made it easier for Fanta to settle. By the time we made it to my seat where his familiar mat was already waiting, he had had a few minutes to take in the room. I didn’t cue him to lie down. This choice was his – it’s not an easy environmrnt, and if you lie down between rows of chairs, you don’t see what’s going on around you! I wanted him to be able to freely make that choice when he was ready. If it turned out that he wasn’t ready, we’d leave and I’d bring him back to the car.

On all four days, he’d spend about 3 minutes looking around (he is so tall that he can look over the tables at the presenters and the screen), and then put his head in my lap so I could massage that particular spot behind his ears. He’d also approach our friend Kati, who was sitting next to me, and solicit a little massage from her, too. And then, about 3 minutes in, he’d lie down on his mat, put his head on his paws, and relax. 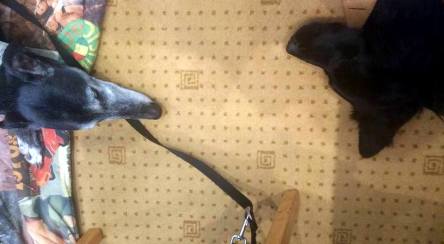 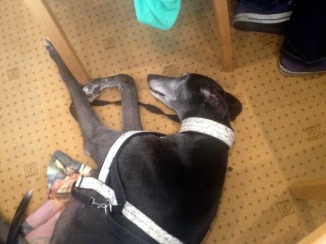 I am aware that this is still not Fanta’s most favorite environment, but he’s getting better and better. The time he took to settle and relax on his mat also became shorter every day. And once he was lying down, he was perfectly relaxed, licking the toe he likes to lick before falling asleep, assuming a relaxed posture with his weight shifted onto one hip and his legs stretched out to the side, and eating the occasional piece of hot dog that would materialize before him. I’m very, very proud of my big black boy. He’s come a long way.

Phoebe is an extremely active dog. She loves attending training events with me – the most challenging part for her is to relax rather than constantly offer behaviors. The little white workoholic used to have little frustration tolerance and a very hard time to just lie next to me and do nothing while in an atmosphere vibrating with the possibility of training.

I’ve been taking her to seminars ever since she was a puppy. And when she was a puppy, relaxing there used to work well enough. She was an excellent seminar poodle at Katie Sdao and Emily Larlham and the first rounds of my dog trainer course with Anne Lill Kvam when just a few months of age. Knowing how important it is to be able to switch from work mode to settle mode, I had practiced Karen Overall’s relaxation protocol, I exercised her before entering a seminar room, and I brought Kongs for her to chew and help her settle. She kept being a perfectly settled puppy at work, where I took her from an early age: she’d lie on her mat in the classroom for 3 hours while I taught German as a second language, chewing her Kong or sleeping. This behavior never deteriorated – I’m pretty sure because all we ever did in the language classroom was relax. However, in the seminar rooms where she was required to take turns working and relaxing, the onset of adolescence challenged her excellent manners.

Adolescence kicked in, and our beautiful settle-everywhere behavior went right out the window. We’ve been working hard to get it back, and at 2.5 years of age, we started getting it back. Last weekend – a month before Phoebe’s third birthday – she proved that she could be a perfectly well-mannered seminar dog again.

Another thing I’m pretty sure has helped is that we’ve been practicing settles in between agility runs, which is an even more challenging environment than a seminar room. Furthermore, this time, I made sure I let Phoebe acclimate before expecting her to settle. Like Fanta, she got a few minutes to explore the room, sniff the floor and the objects in it, take in the other dogs and people from a safe distance before we made it to her settle mat that was already waiting. Like Fanta, I didn’t ask her to lie down, but let the mat itself work its magic and cueing her to settle. And it’s been working wonderful. 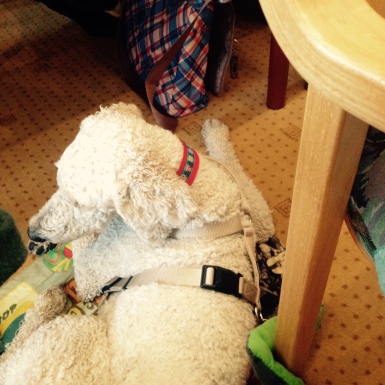 On the days where our friend Kati, who was sitting next to us, didn’t bring her dog, the occasional reinforcement was all that was needed to do the trick. On the days that Kati had brought Phoebe’s playmate Jana, I reinforced her frequently for lying patiently on her mat: first, every 30 seconds, then every 45 seconds, then every minute. I gradually increased the time and used higher-value reinforcers when Jana was lying right next to Phoebe. I am aware that when doing this, Phoebe wasn’t entirely switching off – she was lying there in a relaxed body posture, but her head was up. She was looking around, but not about to fall asleep, and part of her attention was with me. But that’s okay – having Jana next to her and not being able to play or work is much harder, so the level of relaxation I’m expecting was lower.

Apart from taking her to the seminar room (with 80 human participants, some of whom had brought their dogs with them, too!), Phoebe and I also participated in Helen Phillips’ learning lab. I’m particularly proud of how well she dealt with this situation: there were about 40 people and 6 dogs in a relatively small room. People were clapping, laughing and clicking each other. Treats were being thrown into bowls, frequently missing and landing next to Phoebe – who didn’t try to go for them. An unfamiliar dog was right next to her. Wow, she did SO well! She had calm, focused attention on me, assuming a relaxed position on her mat and waiting for her turn:

When it was our turn to work with Helen, Phoebe kept doing a fantastic job: she gave me patient attention when waiting her turn. She focused on me, ready to work, not bothered by everyone around her. She didn’t impatiently throw behaviors at me. It was as if her and I were the only ones in that room.

Helen’s learning lab was about going back to the basics and fine-tuning our clicker skills and our treat delivery. My task was to neither use a treat bag nor hold the treats in my hand, but to put it in the pockets of my pants, wait for Phoebe to offer eye contact, and then throw her treats so she would break eye contact. Upon turning back, she’d have the oppprtunity to offer eye contact again. First, I used hot dogs, but since they were hard for Phoebe to see on the broun carpet, I switched to different treats in the second round. The second round, Helen instructed me to take the treats out of my other pocket and switch the clicker to the other hand.

It was a fun learning lab – particularly because I got to practice a simple behavior in a challenging environment. I’m proud of Phoebe, she’s done really well all weekend.

Only on the last day – day 4 – she had a bad start: there was a big big picture of a Border Collie on the screen, and she was looking. directly. at. her. Phoebe growled and barked at her, unable to take treats. Even after the background image was changed, she kept looking up as if she had to make sure the BC hadn’t come back. A little later, she noticed a Collie lying behind her, and jumped again. It wasn’t her day, so I took her back to the car to relax.

However, all in all, I’m very proud of my two four-legged friends. They have both come a long way, and it’s easy and fun to take them new places!